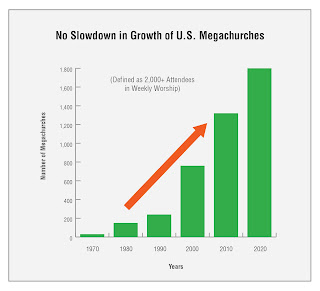 The number of very large churches has increased dramatically over the last 50 years, as the graphic powerfully illustrates. As stated in the recent ECFA co-sponsored report, “The Changing Reality in America’s Largest Churches,” megachurches are pacesetters. We see this unfolding as megachurches continue including multiracial worship, developing special needs programs, and developing a lay leadership infrastructure. In the past, I’ve written about other megachurch unique qualities from: sanctuary sizes (very few new ones over 5,000) to the first megachurch (start with Pentecost when “about 3,000” were converted, per Acts 2:41) to global megachurches (Nigeria and Korea are currently leading).

But what about the people who attend really big churches? Fellow researcher Scott Thumma and I surveyed some 25,000 of them, with some fascinating discoveries:

1.     Nearly two-thirds of megachurch attenders have been at these churches 5 years or less.

2.     Many attenders come from other churches, but nearly a quarter haven’t been in any church for a long time, before coming to a megachurch.

3.     New people almost always come to the megachurch because family, friends or coworkers invited them.

4.     Fifty-five percent of megachurch attenders volunteer at the church, in some way (a higher percentage than in smaller churches).

5.     What first attracted attenders were: the worship style, the senior pastor, and the church’s reputation, in that order.

6.     These same factors also influenced long-term attendance, as did the music/arts, social and community outreach, and adult-oriented programs.

7.     Attenders report a considerable increase in their involvement in church, in their spiritual growth, and in their needs being met.

8.     Attenders can craft unique, customized spiritual experiences through the multitude of ministry choices and diverse avenues for involvement that megachurches offer.

9.     In many ways, large churches today are making good progress in reaching people and moving them from spectators to active participants to growing disciples of Jesus Christ. 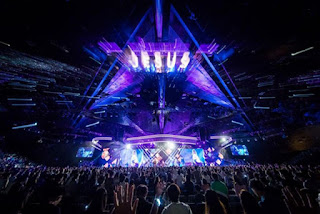 Why does ECFA take such a strong interest in larger-attendance churches, such as by publishing “The Changing Reality in America’s Largest Churches”?  Answer: to serve these larger churches, since so many are ECFA members. ECFA membership starts with a church wanting to live by ECFA’s seven integrity standards. To learn more, see ECFA.church/join.