What has been called "the most segregated hour of the week" isn’t as segregated as it used to be. According to a study that ECFA co-sponsored, American megachurches are now more racially and ethnically diverse than ever.

Among the 24 findings in the “Megachurch 2020” report (free download here), this diversity finding more than any others was widely headlined. The story was picked up in publications ranging from, Christianity Today to Ecumenical News, from denominational publications to more hipster publications like Relevant magazine and Religion Unplugged.

The massive survey of megachurches, conducted every 5 years, explores the racial makeup of those who attend such churches. The percentage of multiracial congregations has grown from 21% in 2000 to 58% in 2020 (with the 2020 research conducted just before the global pandemic prevented churches from meeting in person). 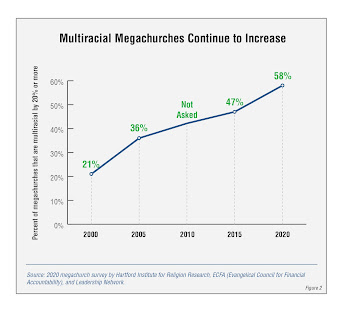 The survey defined multiracial churches as having 20% or more minority presence in their congregation. Historically, megachurches have led other sizes of churches in becoming more multiracial.

What helps churches become more multiracial? Size is a significant reason for this diversity, but such diversity is also augmented by an intentional desire for diversity and the leadership willing to change various church dynamics necessary to bring this to reality. When asked, “Is [the congregation] striving to be diverse (e.g. racially, ethnically, socio-economically)?” a whopping 78% agreed or strongly agreed. In short, the research found a powerful statistical relationship between those churches who were striving to be diverse and actually have a more multiracial congregational makeup. 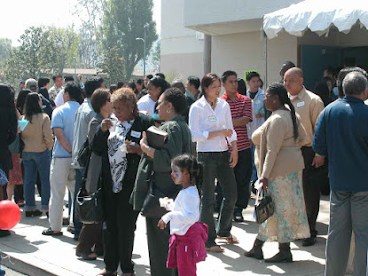 This increased racial diversity also goes hand in hand with a number of other characteristics that all describe a church that has created a culture of welcome and inclusion. These characteristics include being better at incorporating new people into the life of the church, having a larger percentage of recent immigrants in the church, being more open to persons with special needs (by being very intentional about such ministry or offering certain accommodations), and having higher rates of new people in the previous 5 years.

Racial diversity also comes with a considerable mix of economic groups and educational levels, with roughly 50% being college graduates, significant representation from all age groups (a greater mix of ages than the vast majority of smaller churches), and diversity of political persuasions and income levels.

If the trend continues, statements about “America’s most segregated hour” will continue to become less true of large churches with each passing year.

Likewise, ECFA’s membership becomes more diverse with each passing year. Our member organizations not only serve a broad array of races and ethnicities, but their leadership is likewise increasingly diverse. According to preliminary findings from a survey we’re fielding this month, 11% of CEO’s (or equivalent top leader) of ECFA’s nonprofit ministry members are non-white. To learn more about becoming an ECFA member (both churches and nonprofit ministries), click here.