Should “Independent” Members Be the Majority on Your Church Board?

Some church boards are family affairs – maybe dad is the lead pastor, brother the executive pastor, mom the chief financial officer, eldest child the youth director, and so on – with family members making up the majority of the church board. Other church boards are staff-driven, with a pastor leading and other paid staff occupying a majority of seats on the board. Neither of these scenarios represents an independent board.

At first impression, such an arrangement might seem simple, easy, and even natural. But looking more deeply, who sets the senior pastor’s salary—family members? employees? How does a board with that composition avoid conflicts of interest or the appearance of partiality in being self-serving? Also, if the pastor should go haywire, or if a rogue financial practice should develop, are family members going to risk making a stink that leave them uninvited for Thanksgiving? Are employees really going to risk losing their jobs by calling their boss’s hand?

Bottom line: will the potential blind spots built into the board’s makeup undermine the trust of those it seeks to represent and serve?

Boards primarily comprised of family members and/or staff are not considered “independent.” By contrast, an independent board is one in which the majority are not paid by the church nor are they a relative/spouse of other board members. This is such an important integrity issue that it is one of ECFA’s Seven Standards of Responsible Stewardship®.  The statement begins, "Every organization shall be governed by a responsible board of not less than five individuals, a majority of whom shall be independent...."[1]

What insight does research add to these questions? Beyond the just-made argument for integrity, do independent boards differ in actual practice from boards that are predominantly family and/or paid staff? Yes. ECFA’s national church board survey asked participants if their board meets the standard of being independent. We compared those who said “yes” vs. “no.” (And fortunately, only a very small percentage said, “I don’t know”!) The graphic below highlights some of the main differences we found. 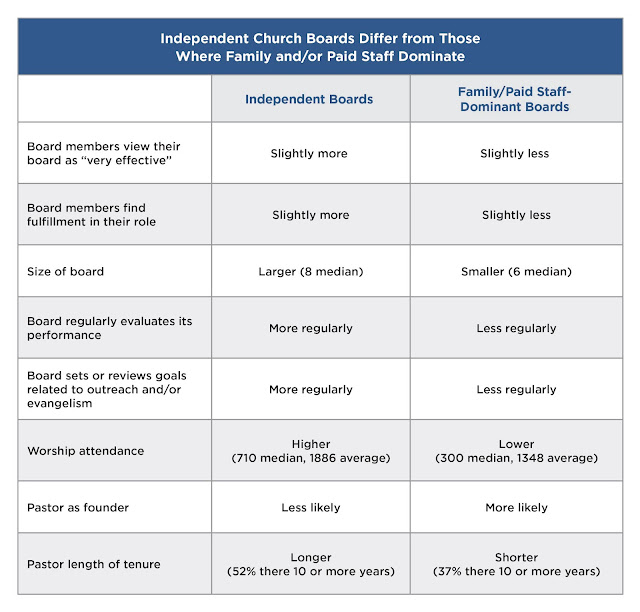 Note especially that the members of independent boards gave themselves a higher rating as being effective. ECFA believes that “when a ministry encounters failure—or even worse, scandal—its difficulties can almost always be traced to a breakdown in governance.”[2] We encourage you to take the high road and structure your church board so that the majority of members are “independent” not only in terms of family and/or staff relationships—but “independent” in governance mindset.”

A formal report on this survey has not yet been released. It will be announced on this blog, and through other ECFA channels including this link for survey findings Meanwhile, please add your comments and questions to this blog. Also, click here for other blogs in this series.