Did you know that the more your church involves its people in small groups, the more its financial giving will increase?

This finding comes from research ECFA helped conduct on megachurches—the largest study ever conducted on large churches across the U.S. (See below for details on how to download our entire research report.)

The use of small groups has long been a hallmark of megachurches—the idea of distinct units within the greater church where people know each other personally and participate in various kinds of spiritual ministries. Their purpose can include fellowship, spiritual nurture, ministry, and/or religious education. They might be called names like: Sunday school classes, Bible studies, missional teams, home groups, community groups, discipleship groups, or any number of other terms. 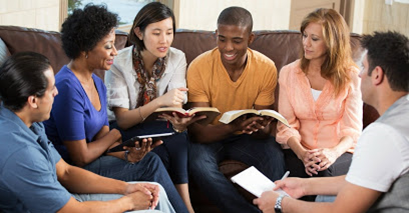 ECFA’s landmark survey found that small-group practice continues to increase dramatically, but also that the impact on spiritual health through the use of small groups is profound. When asked if small groups are central to their strategy of Christian nurture and spiritual formation, an astounding 90% of megachurches said “Yes” (see the first graphic.) 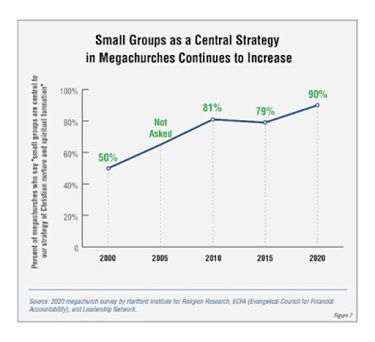 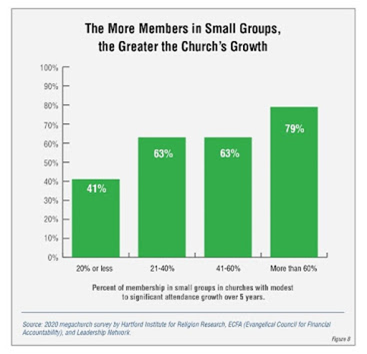 This percentage has steadily grown over the years. For example, back in 2000, only 50% of megachurches said yes to the same question.

When asked what percentage of the church’s adult participants are typically involved in a small group, the response in 2020 was a median of 45%. In 2015, the median was 40%. This increased priority given to small groups, is evident in the growing percentage of adults who are involved in small groups within their congregations. Small group participation is directly related to a number of positive trends for the congregation. As the second graphic illustrates, the more adults in small groups, the greater the church’s growth rate.

The churches with the highest percentage of their congregation active in their small groups were also more likely to say they had larger percentages of their members volunteering regularly at church, recruiting new people, sharing their faith with those not a part of the congregation, being new to the congregation in the last 5 years—and, as introduced above, giving financially to the church. These are noteworthy findings!

Just how much more do small group members give to their church? On average 9%. That percentage would be a meaningful boost to any church's budget.

ECFA’s “The Changing Reality in America’s Largest Churches” report runs 22 pages and is the largest national study EVER of trends in U.S. megachurches. If you want other ministry friends to download it (hint, hint), it’s free at http://www.ECFA.church/surveys.